Our shops are starting to reopen! | Having a clear out? Save it for Scope — Scope | Disability forum
If we become concerned about you or anyone else while using one of our services, we will act in line with our safeguarding policy and procedures. This may involve sharing this information with relevant authorities to ensure we comply with our policies and legal obligations.

Our shops are starting to reopen! | Having a clear out? Save it for Scope 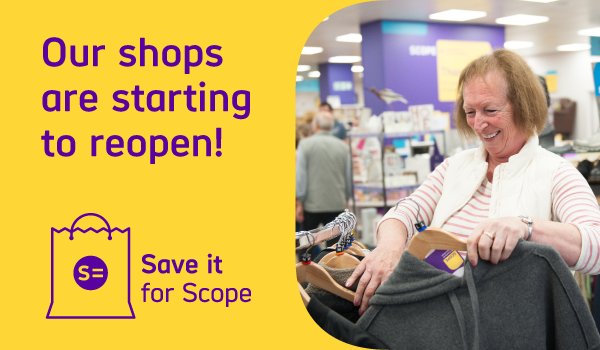 Our shops are starting to reopen from 15 June, so it’s nearly time to bring in those items that you cleared out during lockdown! Now more than ever Scope shops need your donations so we can be there for disabled people.

This year there is a significant shortfall in donations to Scope because our shops have been closed. We urgently need to generate 150,000 bags of donated stock, which will raise £2.2 million. To help solve this problem, we are running a campaign called Save it for Scope.

Every donation we receive raises vital funds to enable us to provide practical advice and emotional support to disabled people and their families when they need it most.

You can also support the campaign by telling friends and family and sharing it far and wide on social media.

To find out more visit scope.org.uk/shops

Tell us how to make the community better for you. Complete our feedback form.
1 · Share on FacebookShare on Twitter