Home › Scope's online community Undiagnosed and rare conditions
If this is your first visit, check out the community guide. You will have to Join us or Sign in before you can post.
Receiving too many notifications? Adjust your notification settings.

Am i the only one? (warning graphic photo)

I wasn't sure if I wanted to share this? but I really need some help, advice and support. scope have told me to remind you there is a graphic photo thanks.

In 2015 I started with hearing problems, I could hear buzzing noises and hear my heart beating. So I went to my doctors who told me I had fluid in both of my ears. (He was very surprised I wasn't in any pain) he gave me a prescription for a nasal spray, and told me to go back if I had any more problems.

Then in 2016 I was admitted to hospital, with serious infections to my left leg and hand. My doctors at the time told me, they looked like insect bites? that had got badly infected. On the third day in hospital, I could still hear the buzzing noises in my ears, but couldn't hear what people were saying anymore. After numerous hearing tests, MRIs, blood tests etc, I was told I was proufoundly deaf and I wouldn't be able to hear again.
They tried everything, hearing aids etc, and I even went to the cochlear implant hospital (no good).
More and more infections came, with no reason to why?

It wasn't long after my hearing went, I started having problems walking. My hands and feet felt cold and numb all the time, and I started having dizzy spells. So my doctor referred me for an emergency appointment with a nuerologist. Again after more tests, blood tests, lumbar puncture, evoke, electric impulse. and after numerous diagnosis Susac's syndrome, lymes disease etc.
He told me that the infection I had in my ears, had caused a lot of damage to the nerves in my brain, and there was nothing he could do to help. He also told me that I could have a very rare incurable disease called "Sweets syndrome". Everything matched perfectly, the hearing loss, infections, ataxia ect.

Again I had to go to hospital because of yet another infection to my right leg. the plastic surgeon who came to see me, told me that the infection looked like "Pyoderma Gangrenosum" He said he didn't want to take a biopsy, because if it was PG the infection would spread. So he instead referred me to a skin specialist, who could give me a definite answer. Again after blood tests, biopsy etc she told me, that I do have both SS and PG. I was so relieved I had been given a diagnosis.

About 2/3 weeks after my skin specialist gave me my diagnosis, I received a letter in the post. It said that there had been a meeting, and they had decided I didn't have the characteristics for SS or PG. And that they were going to leave me an open appointment, for when I have another infection. "I cant tell you how angry I was" people who I've never met, who don't have other hospital reports, who has only seen 1 infection come to that conclusion. Not only that but my skin specialist never even attended the meeting and now lives in Australia.

My nuerologist still agrees with me, that I still could possibly have SS. And on a recent blood test. it still shows that I do have "non specific vasculitis".

I just have to live with the not knowing and try and deal with my disability's I have now. I wanted to ask if others have to deal with scarring and how they cope especially has summer is now here. I still feel to embarrassed to show my scars, and hide my body when I go out.

This is just one of my infections. 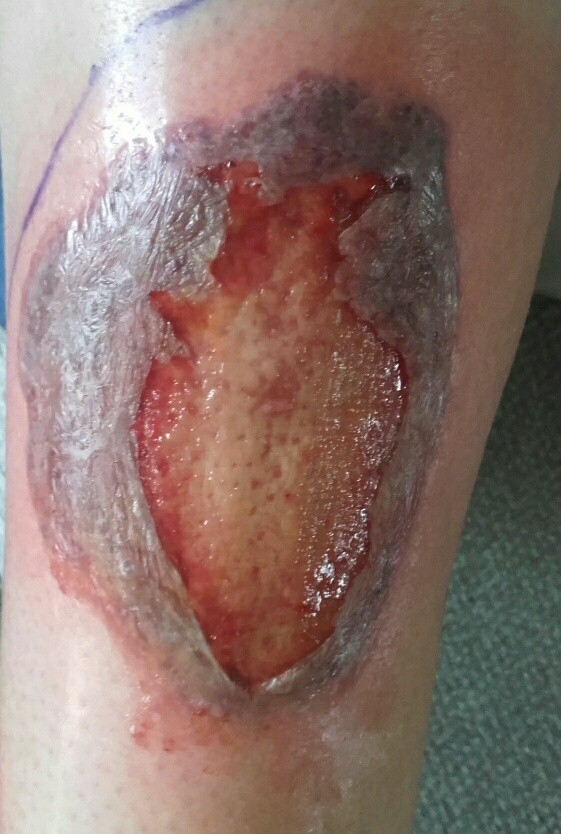