Frustrations an feeling like things are not going to get any better — Scope | Disability forum
If we become concerned about you or anyone else while using one of our services, we will act in line with our safeguarding policy and procedures. This may involve sharing this information with relevant authorities to ensure we comply with our policies and legal obligations. 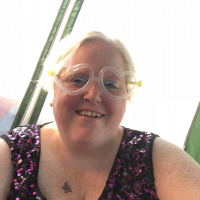 Debzeb Member Posts: 9 Connected
October 2018 in Coffee lounge
hi, my first post on here , I hate the word disabled is that bad? My basic story is this, I had epilepsy from about 4/5 years old I got on with life I had good friends and still do ! I hit my 20th birthday I’d moved home after training to become a florist after school  opened up a flower shop very successfully , then one night had several fits that just wouldn’t stop, I was rushed to hospital a hospital that I was never under they found my brain tumour and put my family into turmoil , I had to move back to my dads to have radical radiotherapy it was a ghastly journey as the say ! My left side was affected by the biopsy I had done , had a brain haemarrage it affected my left side I have a trem in my left arm and leg , I can control if I’m not stressed .i was told it was a grade 4 glioma and I wasn’t going to last a month , back then I can still remember at the top of my notes it was written in red terminal, Well I had radio first split the tumour the size of a orange!  Then a couple weeks later next Mri it joined altogether again ,so onto chemo it was. I put on so much weight because the steroids affect you , I was told your going to have a 12week course chemo , I’d always been fat not mincing my words but I ballooned to 24 stone they call the affect on you moon face ,I was more like a chubby hamster .but I started chemo only could take 8 weeks of it I’d gone to being massive to 9 stone full blood transfusions an platelets  my Family wasn’t offered any support no McMillan nurse nothing we jumbled along , I took all they gave me , then one day I was called into my oncologist , there was a lot of drs in the department ones I’d seen over the months to be told my tumour had disappeared , I will never forget that day and the struggles but twenty years in I’m still in remission, but I haven’t been lucky in 2007 i was struck down with meningitis I was paralysed down one side for weeks in hospital for a long time  I worked hard worked hard with physio and learnt to walk again not perfect but back to my clumsy clod self , family was key for me and friends . But 7 years on I got meningitis again it was like ground hog day but worse I’d been clear of fits for more than five years ( controlled) these fits were some of my worse ones I was awake while it happened my sister had to email the head of the hospital no one was doing any thing ! I told the drs to put me in a induced coma the fits were so harsh face contortion I’d never had finally they started antibiotics through the night they found a water infection combind wa ear infection ( which I’d been to the drs about two weeks before!!) let down is how I felt , I had just took my first steps working with the occupational therapy and physio team an I was struck down with pneumonia, set me back so much , I managed to fight that an got to my feet sort of the hospital got me a place in a rehabilitation centre near where my flat is  and not far from family too ,three weeks in there I got to my feet with a Zimmer frame I couldn’t believe I was going through it again but I am still working hard to improve things I have had to give in and buy a mobility walker thing , never thought I’d be like this I used to whizz about on the bus where one bus trip completely I get worn out over the past two years I’ve had several falls my left leg jus has a malfuntion, but as my mum always drummed itminto me there is always someone worse off! I know there is but I don’t find that too comforting but I know I’ve nearly died three times and am grateful to be alive I’ve been lucky so my mum tells me but my depression and angst doesn’t help and migraines fro my tumour I have been in a bad place considered suicide, but ....could never do that to my family  everything just seems a big mess my mum is in hospital she’s just had triple bypass , so yet another up heavel just feel so down . But I know I’m luck I do !. I tried to cross the road earlier an no one stopped  to let me cross ! I will carry on with my recumbent bike an fingers crossed it helps ?
3 · Share on FacebookShare on Twitter