Hi, my name is SuePaul07! — Scope | Disability forum
Read our community guidelines and our community house rules.
Find out how to let us know if you're concerned about another member's safety. 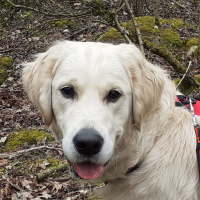 SuePaul07 Member Posts: 6 Listener
April 12 edited April 13 in Start here and say hello!
Hi.  I'm Sue and my husband is Paul.  Paul is a civil servant - well, he works for the Govt - and I'm his carer.  In 1965, Paul was born 9 weeks premature and was diagnosed with mild spina bifida and spastic diplegia.  He's also got Aspergers.  We live in a little village no-one had heard of until a year ago. Thank you Capt. Tom! :-).  We share our home with our 8 month old Golden Retriever, Merlin who is a boisterous puppy but great fun.  Paul's hobbies are classic Jaguars and motor sport.   Glad to be here.
Best wishes
Sue

"It is not the critic who counts; not the man who points out how the strong man stumbles, or where the doer of deeds could have done them better. The credit belongs to the man who is actually in the arena, whose face is marred by dust and sweat and blood; who strives valiantly; who errs, who comes short again and again, because there is no effort without error and shortcoming; but who does actually strive to do the deeds; who knows great enthusiasms, the great devotions; who spends himself in a worthy cause; who at the best knows in the end the triumph of high achievement, and who at the worst, if he fails, at least fails while daring greatly, so that his place shall never be with those cold and timid souls who neither know victory nor defeat."  Theodore Roosevelt - "The Man in the Arena" - a speech given at the Sorbonne, Paris on 23.04.1910.
Tagged:
0 · Share on TwitterShare on Facebook