Being A Radio Host With Asperger's Syndrome — Scope | Disability forum
Find out how to let us know if you're concerned about another member's safety.
Read our community guidelines and our community house rules.

Being A Radio Host With Asperger's Syndrome

"I am a walking contradiction. At 27, I am quite a shy person who hates crowds and who loves to be at home listening to the radio; yet I used to be a performer. I find it difficult to communicate with new people, but I am a radio presenter. I have struggled mentally, on many occasions, to keep things together, but I continue to attempt a career in the media; I have Asperger's syndrome."

When I was diagnosed with Asperger's syndrome at 23, it changed my life. It felt like a thousand questions had been answered at once, and things gradually became clearer. I had suspected something in my early years considering I went to a special educational needs school, but nothing happened. It was not until I went to college that I had truly stood out. My interests were incredibly niche, and I tended to look at things from a different viewpoint. This all contributed to my lack of ability to form proper relationships with my peers, and I felt isolated. Over time, I learnt to develop my niche interests to help pull me through and strengthen my weaknesses. 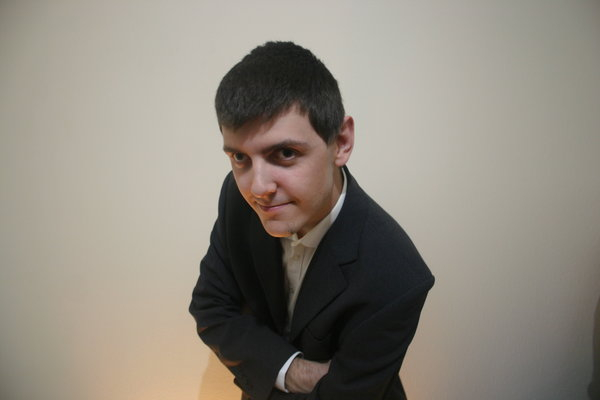 I have presented on the radio for nearly 10 years, broadcasting on many stations around the world via different platforms. While still at school, I did a broadcasting course at community radio station Tulip Radio, learning a number of interview and presentation techniques. My conversational skills were never the best, but the course really helped to improve my confidence and speech. From a broadcasting point of view, it was invaluable. I got my first break as a presenter in 2008, when I was invited to present on Boston's community station Endeavour FM. A year later, I moved back to my birthplace of Chichester, West Sussex to study a BA Hons in Media Production and Media Studies at the University of Chichester. While studying, I built a basic studio in my home and began broadcasting online. I spent the next few years honing my presentation skills, and networking with different people; in the hope I could get a job in the industry.

When this looked unlikely, I started a community radio station called SouthWaves Radio; this specialised in speech and drama programming. I decided to put together everything that I had learned in education and voluntary experience, into the project. During an unpaid two year stint, I worked with many organisations, charities and businesses on the creation of content. I was riding high with the success of this venture, my mental health started to gradually deteriorate. Due to overwork and a lack of understanding of my influences, I had to shut down the station and try something else. I spent several months attending sessions and trying things that didn't work out, until I re-found myself and began working from there. Part of it was rediscovering my love of the radio.

As a listener, I've always found music radio somewhat intrusive. For me, it was the presenters who are the stars of the show. I am probably the only guy who believes that Chris Moyles doesn't talk enough! That isn't to say that I think music is a bad thing in broadcasting; I just believe that it should be seen as a piece of the puzzle than just the puzzle itself. When I discovered speech based radio, it was like a whole world had opened to me. After the closure of SouthWaves Radio, I found great comfort in listening to The Late Night Alternative With Iain Lee on TalkRADIO. There was something about his slightly eccentric, spontaneous but friendly manner that really spoke to me. Some of my other 'comfort listens' originate over 70+ years before that show, but have great influence.

I am a great enthusiast of the golden age of American radio, which is usually defined as being between the early 30s and early 60s. Radio, in those days, tended to centre around light entertainment, drama and comedy. I have, in particular, always appreciated different forms of comedy. It does not always make me laugh, but rather works as a comfort listen. My favourite is The Jack Benny Program, which is rarely remembered today. Listening to those shows are like catching up with a friend; the conversation is light, the gags are audio visual and the running jokes feel familiar yet fresh.

In recent times, I was confused about my future but have started to see things clearer. In this day of social media, I believe that anything is possible; if you have faith in it. Although I have often had doubt in it, I would love to broadcast professionally, or at least be involved in some way. I understand that many of the things I love about radio, simply do not exist any more; or in least the way that it used to. That is normally the part that I struggle with, as I often feel like a man out of his time. My greatest challenge, yet my greatest strength, is to combine everything that I love; creating something new and uniquely me

If I fail in my attempt to become a broadcaster I would love to be a professional stage compère or radio comedian; along the lines of Bruce Forsyth or Jack Benny.