Accessible gaming Q&A — Scope | Disability forum
If we become concerned about you or anyone else while using one of our services, we will act in line with our safeguarding policy and procedures. This may involve sharing this information with relevant authorities to ensure we comply with our policies and legal obligations.

Hi, my name's Barrie Ellis, and all this week i'll be answering your questions about accessible gaming. Simply post your questions in the comments below.
I've been working in the field of accessible gaming since 1994, and love finding and sharing solutions in this area.
Due to me being quite old, I do remember when Space Invaders was brand new and very exciting. At first, I frustratingly couldn't play it, because I was too short to see the bottom half of the screen. I wasn't alone, and soon I discovered my first piece of assistive gaming technology: a drinks crate to stand-on. 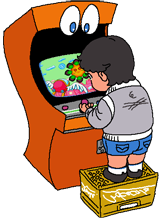 In my work and spare time, I specialise in adapting game controllers and one-switch accessible games, but I'm keen to help anyone who is facing barriers to being able to play.
I'd be happy to try to answer any questions you have, and am equally interested in anything you might like to share in this area.