Skating Adventures with Wheels and Wheelchairs — Scope | Disability forum
Find out how to let us know if you're concerned about another member's safety.
Read our community guidelines and our community house rules.

Skating Adventures with Wheels and Wheelchairs

Wheels&Wheelchairs Member Posts: 1 Listener
April 2018 edited October 2021 in Disability rights and campaigning
Janet Richards is President of Wheels and Wheelchairs, a charity which takes wheelchair users rollerskating. Here Janet, from South London, explains how they do it and how she got involved.

If you had told me five years ago that I would be rollerblading around Paris and Berlin with a skate crew, I would have laughed in your face. I had had my right leg amputated as a result of gangrene - a complication of diabetes. Amputees aren’t known for balance, so roller-skating seemed as unlikely as a trip to Mars!

I was diagnosed as a Type 1 Diabetic after going into a coma for several days at the age of twelve. Diabetes has affected my health badly.  A few years ago I needed open heart surgery, but the most devastating blow was losing my leg in 2006. 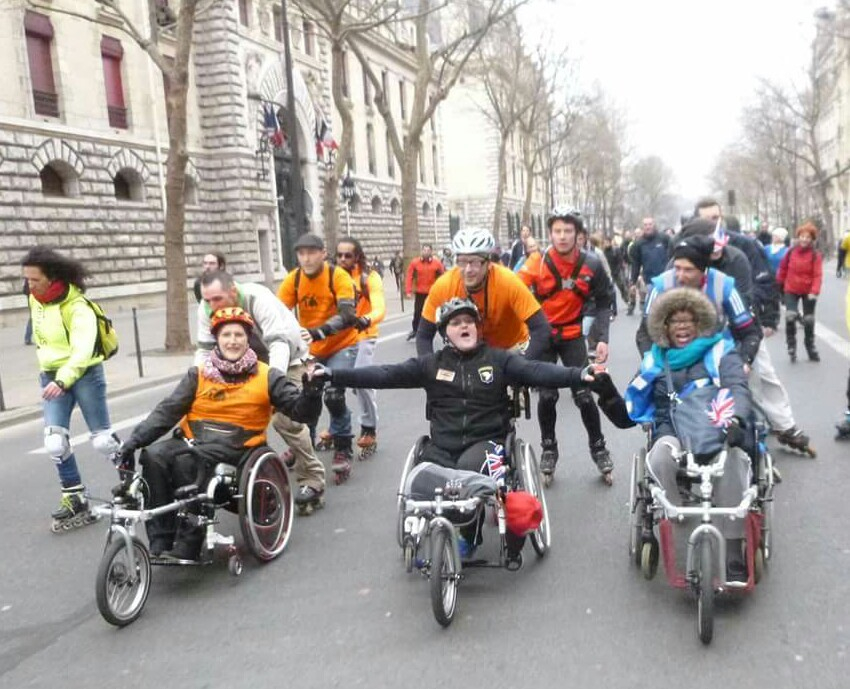 It took me about 2 years to adjust to the psychological trauma and the body image issues that ensued. I eventually learned to walk again using an artificial leg but the distance I could walk was limited.

I have always loved meeting people but my social life disintegrated. I lost touch with most of my friends. Outside activities felt out of bounds as it was a struggle for me to get anywhere.

Then in 2015 I discovered Wheels and Wheelchairs quite by chance after stopping off at a café on a hot day in August that year when I was tired. Whilst there, a skater who worked as a waiter there told me about the group and she invited me to meet up with everybody, introducing me to this group of roller skaters who organise skating events involving wheelchair users in parks and other places around London.  They use specially-adapted chairs (with disc brakes), and experienced skaters push the wheelchair users (both children and adults) at speed. We all love it! 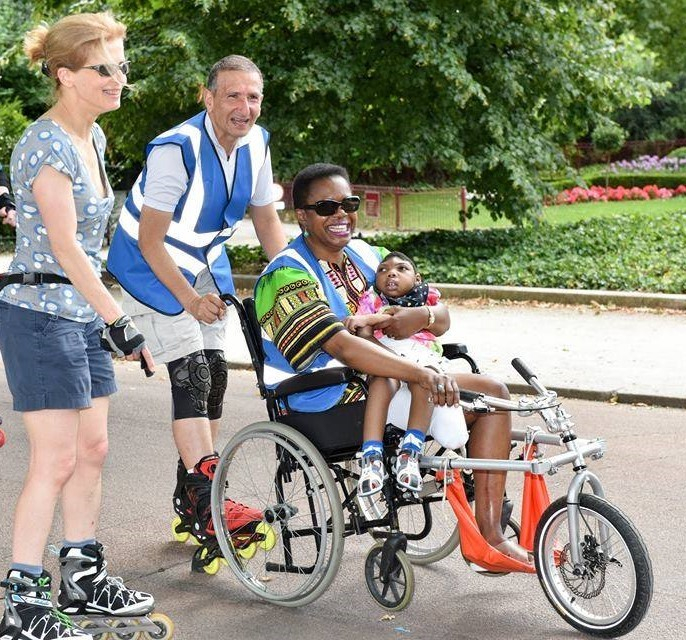 As well as the physical thrill of moving at high speed, skating is an incredibly social sport. Wheels and Wheelchairs are part of the thriving London skating scene. As well as weekly get-togethers, they join the annual Halloween, Santa and Easter Bunny skates where everyone gets to wear fancy dress.

On the weekly Street Skates, a team of marshals from the London Friday Night Skate assess the routes for skate-ability and safety and guide the group through traffic. A rolling DJ provides music to speed along to. It’s a joy to take part and even more fun to see people’s faces as we glide past.

Joining Wheels and Wheelchairs has given me a whole new lease of life. I have made many wonderful friends and travelled across Europe.  We have been to Paris on several occasions where we have skated together with our sister charities including the French group, ‘Mobile en Ville’, and the Belgian group, ‘Rouli Roula pour Tous’. All three groups also competed at the Berlin Inline Marathon in September 2017. 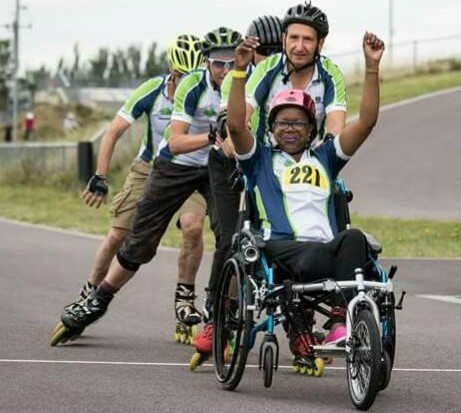 My life has changed beyond belief. I experience the real spirit of all the energy involved whenever we go out together every week as I get to see the skaters in action, and I have a fantastic group of skaters pushing me!  My excitement and enthusiasm for skating was recognized when I was voted President of Wheels and Wheelchairs and this role is something that is character building and incredibly enjoyable.

Come down and see for yourself – you would be welcome!

Our next big adventure is skating from London to Brussels over six days in August this year. This will include more than sixty people - six wheelchair users as well as skaters, and volunteer helpers from UK, France and Belgium. This exciting challenge needs enormous energy and we are very busy organizing and fund-raising for this right now! 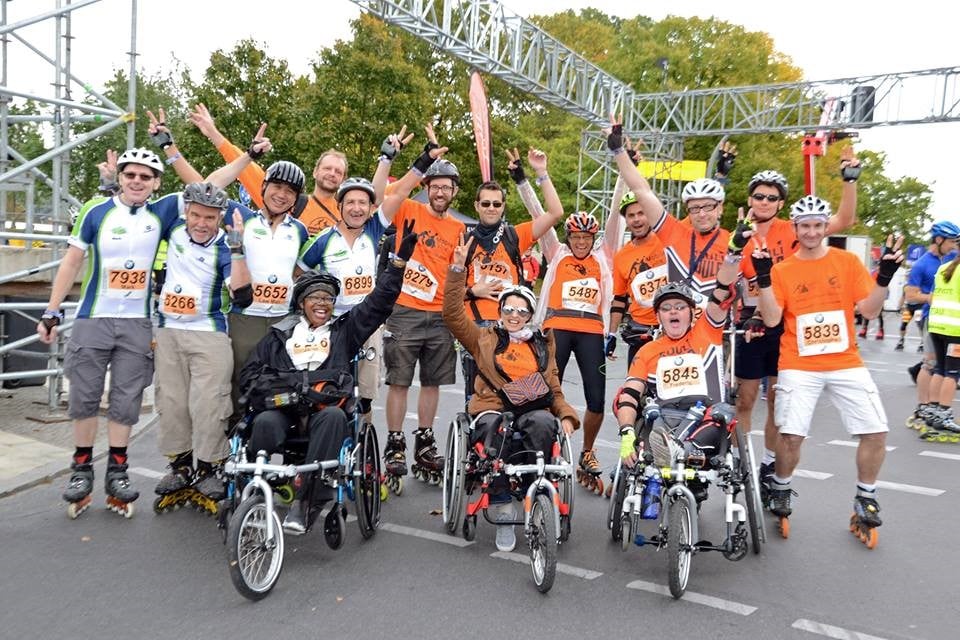 London to Brussels is a wildly exciting adventure for our charity. It will be fantastic to show solidarity with our sister groups in France and Belgium by completing the triangle they started. As a wheelchair user myself I can testify that these unique trips are life-enhancing and enabling. We are most grateful to everyone who has donated their time, energy and cash to making this happen.

The challenge involves a total of around 60 people (approximately 20 individuals from each of the three countries we will be passing through). All the participants, both the able-bodied and the wheelchair users, have been chosen on the basis of their enthusiasm for this project, which requires both endurance and determination in addition to constant vigilance and a cheerful disposition in the face of adversity. The wheelchair users have a wide variety of conditions (paraplegia, amputations, degenerative illnesses, congenital conditions). The group also includes participants with ‘invisible disabilities’ (severe head injury, deafness, organ transplants) who will be participating in different roles.

To find out more about Wheels and Wheelchair, head over to the facebook page or the twitter page.

What do you think of this group? Do you attend any accessible groups? What activity would you love to try? Does your impairment ever make you feel excluded from leisure activities?