No pride in wheels? — Scope | Disability forum
Find out how to let us know if you're concerned about another member's safety.
Read our community guidelines and our community house rules.

No pride in wheels? 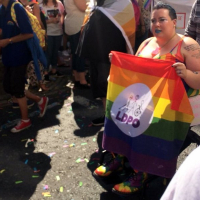 I’m F. R. Kesby, a poet and storyteller from Leeds. My work explores both the political and the personal and often focuses on our emotional connection to the physical world. I also blog about creative writing and disability rights on Spoons and Toons, fashion on Fat Fashion Faes and am a featured writer for the international webzine Women’s Republic. When not writing I study and teach language, listen to 70s music and obsess over plot holes in Doctor Who.

I came out as bisexual when I was a young teenager then several years later I came out as a lesbian, fulfilling my lifelong goal to be a walking/rolling stereotype. Over the last couple of years I’ve also adopted other labels from within the LGBTQ+ community that make sense for me; demi-sexual, gender queer, gender non-conforming, grey-sexual, queer. Not all labels fit perfectly, but the beauty of the LGBTQ+ community is that people are generally quite accepting of people being a bit of the edges of things. But not everything is dealt with well within the community. Racism, transphobia and misogyny are unfortunately prevalent in many circles, as is our good old friend ableism.

The ableism I experience from within my community doesn’t tend to be outright, though I know that does happen. One of the main types of ableism I find is built into the very structure of the community. I mean that literally; the structures in which we meet are not very accessible. Like many cities, the ‘gay’ area in Leeds hasn’t moved since it started so many of the buildings are quite old, which causes problems. Lifts are tricky to install, the entrances are narrow, the streets are cobbled. These are all on the surface ‘legitimate’ excuses, but they cover up an unwillingness. One of the most popular bars wouldn’t let me use the accessible loo because it was actually a staff loo and according to bar staff it was up to security to let me in and according to security it was the managers decision and, naturally, nobody had a clue where the manager was. The only other option was to climb down a narrow, winding staircase using crutches. 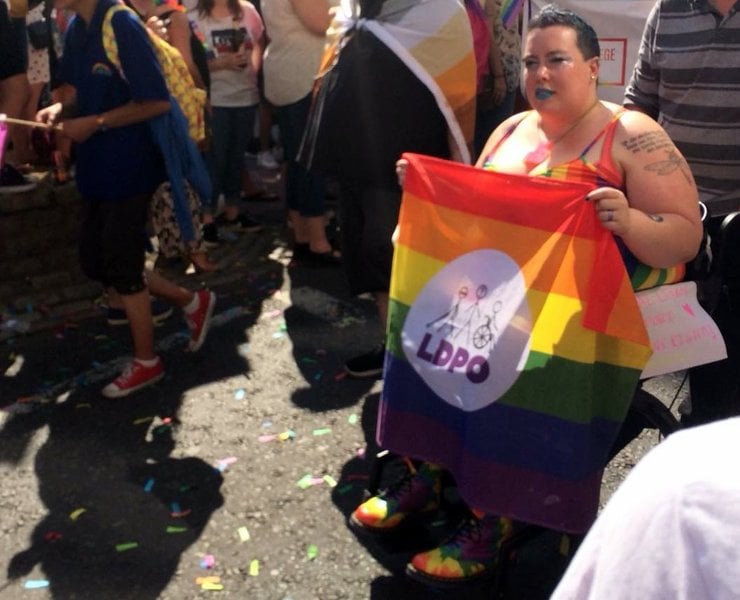 When I and a group of disabled people turned up to the Pride parade this year there was no information available on how to get wheelchairs to the start of the parade, no security available to clear crowded pathways, basically no plan at all. The problem with these situations isn’t that accessibility was impossible, it’s that nobody had bothered to make a plan in advance. Yes, it can be hard to create access in some spaces but it’s even harder if the first time you think about it is when someone is already there asking to use it.

And then there are the people. One thing I learnt this year is that middle aged, white gay men love a girl in a wheelchair. We decided the best thing to do was for me to park on the dancefloor and for my friends to go to and from the bar. Every single time I was alone someone came up to talk to me. I wouldn’t mind that so much, but it wasn’t a ‘do you need a hand?’ or ‘how are you?’ style question. It was the same every time. They leant forward, out their hands on their knees and asked in a high-pitched voice ‘are you having a nice pride? Isn’t it soooooo nice that you got out? Did they take you in the parade? Oh, how lovely for you!’.

Yes, it was lovely that I got to go in the parade – which I do every year I attend! I’ve been in that parade on foot and on crutches. I’ve been in that parade stone cold sober and vomit in public drunk. I’ve been in that parade in skin burning sunshine and wash your hair dye out rain. Nobodies ever reacted like they did when I was in the parade on wheels. I got lots of cheers and claps I wouldn’t normally get, I got people yelling at me that I was brave and wonderful. It was weird. By using my wheelchair I had gone from being a part of the parade, to being an inspiration. I was no longer part of the LGBTQ+ crowd, I was a crowd of one representing the disabled community. I can’t help but feel this is not just my experience, nor just the experience in Leeds.

Has anyone else had a similar experience being disabled in the LGBTGQ+ community?