Our Cerebral Palsy Information Officer Richard recently participated in (and completed!) the first wheelchair-accessible Royal Parks Half Marathon in London. Today he shares with us his experiences:

A different lifetime ago I played wheelchair basketball for my city. I enjoyed the physical competitiveness of the sport and was fairly good. Fast forward almost 20 years and I’m comfortable, settled and content that my involvement with sport goes as far as tuning in to Super Sunday at the weekend. That was until I offered the chance to participate in the first wheelchair accessible Royal Parks Half Marathon in London and I accepted the offer. Now I know what you are thinking; why on earth has he done that? All of the training, the distance etc, etc. Well, for some reason I didn’t take any of this into consideration until I did some research. 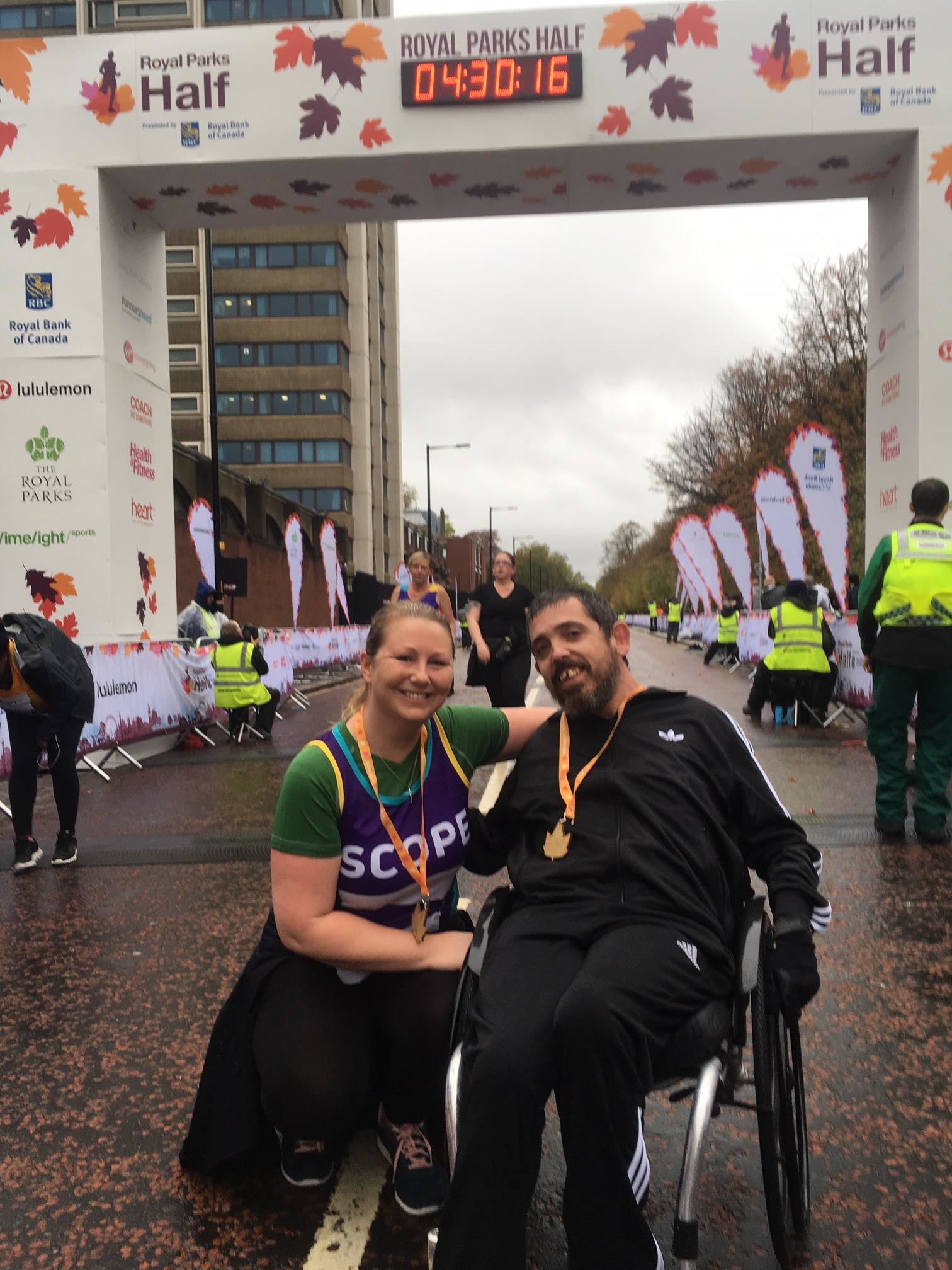 Complete with a sense of the fear of the seriously unfit, I began my training in early September based on the advice I had received from my distance cyclist brother-in-law. Pushing laps around my local area and steadily increasing the distance was the order of the day. Slowly but surely, I could feel my myself getting ever so slightly fitter. Not only that but I found myself spending time with me, no distractions, screens, social media. Just me. I was actually paying attention to what I was thinking and feeling, and my local area! Now don't get me wrong, I still dreaded the thought of having to train and dealing with the hills and uneven pavements, and let's not forget the mocking wheelie bins blocking my route just as I had reached something slightly resembling momentum.  With the attitude of a frustrated and overtired toddler, I continued, and the weeks flew towards the day of distance pushing judgement. I thought to myself "I might just be okay, as long as it doesn't rain on the day".

Race day arrived Sunday 14th October.  Yes, you've guessed it, the rain was like some kind of biblical deluge. In the taxi to Hyde Park, my spirits were low, and I imagined that I would still be trying to complete the race on Monday morning!

When I arrived, I could not believe just how many people were there, I had absolutely no idea that running long distances in the rain was so popular, it was like some kind of festival but obviously without the live music. It felt as though I’d been adopted into a family, a strange but friendly family one made up of serious athletes and people dressed as daffodils and teddy bears and me. 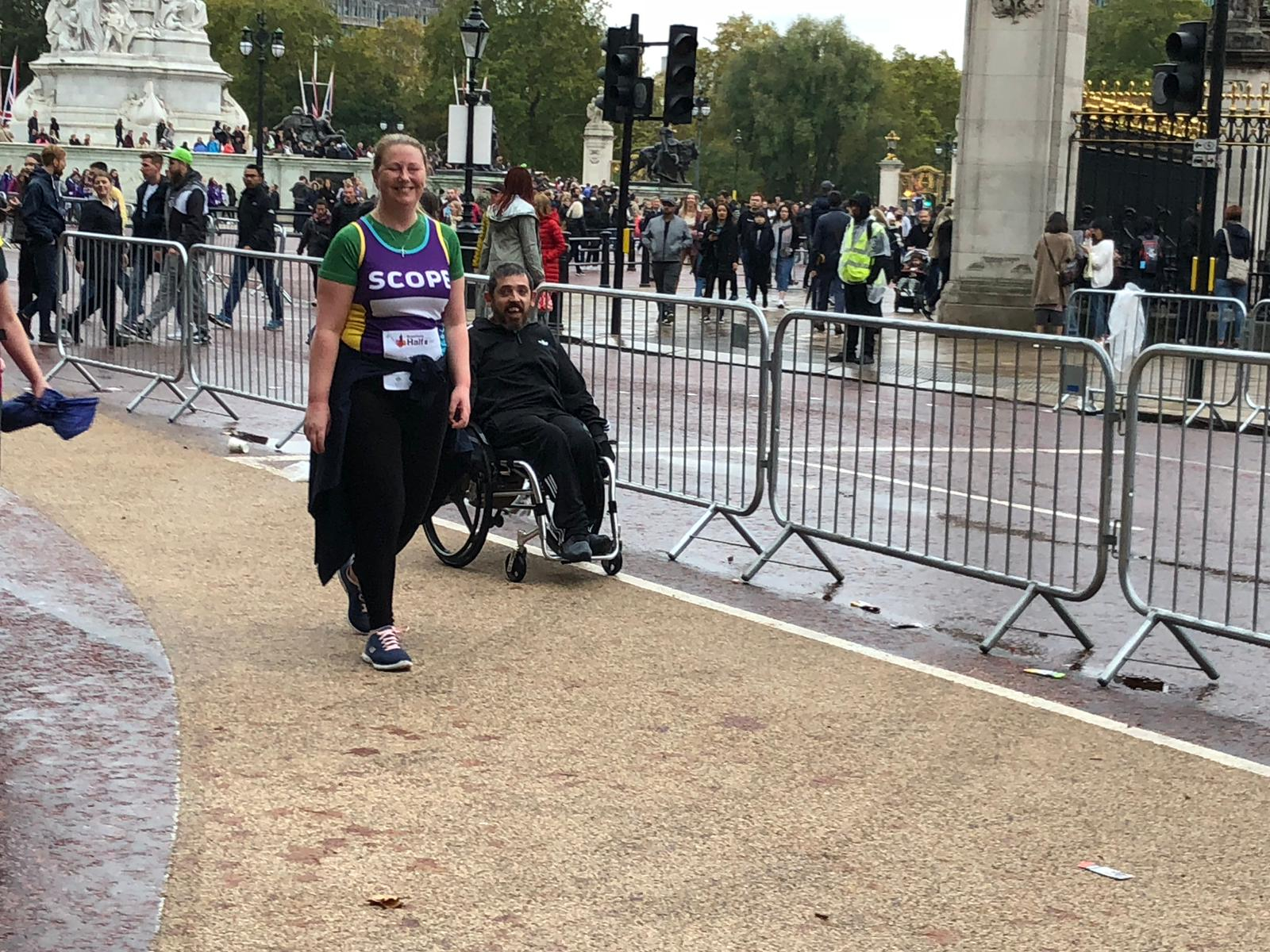 After a time completing the race day administration and getting to the start line, the race began. Before I knew it, the start line was behind me and I was level pegging with a Marvel Superhero who was pushing his sister in what was also her first ever half marathon. The first few miles were fine, and I thought this is going to be great: I’m in London seeing to world- renowned sights up close and personal and the Scope team are cheering me on, as are my fellow competitors. What could go wrong? Mile 7 is what went wrong. My left shoulder started to seize up and just would not do what it has done in times gone past. I slowed to a virtual standstill. Soaked to my underwear, wondering if I will even finish at all. I began to push again slowly and thankfully hit some downhill sections, but it was the support I received from passers-by truly kept me moving to the point that I cannot remember the last 2 miles. I just remember crossing that line. I’d done it, I’d survived!

Now I’m at home writing this whilst aching and feeling rather fragile. I think to myself did the Royal Parks Half Marathon need me? Of course not! But did I need the half marathon? In a way, I think I did. I learned that I had levels of determination that I had forgotten or didn’t know I had and that life without a bit of a challenge or a target to aim for is, well, not a life I want.

I believe that we all have that hidden determination and if we support each other the possibilities are almost endless.

What are the targets that you are aiming for in your life, big or small?

Want to tell us about your experience on the community? Talk to our chatbot and let us know.
5 · Share on TwitterShare on Facebook