Skem Menaces disabled football team — Scope | Disability forum
If we become concerned about you or anyone else while using one of our services, we will act in line with our safeguarding policy and procedures. This may involve sharing this information with relevant authorities to ensure we comply with our policies and legal obligations. 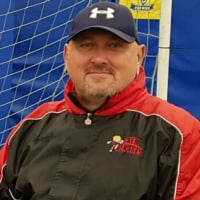 carl1962 Member Posts: 4 Listener
November 2018 edited November 2018 in Exercise and accessible facilities
Hi Mike my name is Carl Eaton, I am the manager of the Skem Menaces disabled football team for adults and Children with all forms of disability. I myself am in a wheelchair through Spina Bifida and right leg amputee.
The Skem Men-Aces is a football team solely for adults/children with learning/physical disabilities based in Skelmersdale. We have been in existence since July 2009 and whilst the club grows at 50+members the phone continues to ring and its popularity goes from strength to strength .We have had tremendous success over our few short years and have been featured on TV, local radio stations including BBC RADIO MERSEYSIDE and the local papers on a weekly basis .We have also been featured in the famous Readers Digest and winning the national award for volunteer of the year through the Sunday Telegraph where we received our award from General Lord Dannatt. We also won a magnificent Silver medal at the Special Olympics National Games held in Bath 2013. 2015 I won BBC North West Unsung hero award where the club was featured on North West Tonight. Also in that year the club received the Points of Light Award from the Prime Minister David Cameron. Our biggest and proudest moment for our club was in 2016 when we were awarded the Queens Awrard for Volunteer Services which is the biggest honour in this Country and it is classified as the MBE for volunteer groups and we as recipients were invited to attend the Royal Garden Party at Buckingham Palace. Only last year I was awarded the Freedom of the Borough of West Lancashire. Our club is not only unique to Skelmersdale but also the North West, which means that we travel all over the country to compete in competitions and now have a very full and proud trophy.
Carl Eaton   https://www.skemmen-aces.org.uk/
3 · Share on FacebookShare on Twitter