The World of One Room — Scope | Disability forum
Find out how to let us know if you're concerned about another member's safety.
Read our community guidelines and our community house rules.

The World of One Room

jayletay Member Posts: 5 Connected
May 2019 edited May 2019 in Disability rights and campaigning

At the age of 15, Jessica became acutely unwell with an illness called Myalgic Encephalomyletis (M.E). She was continuously hospitalised from 2006-2010, suffering with the most severe form of the condition. Now still mostly bedridden even twelve years after it began, she blogs at www.jaytay.co.uk and has featured in a film called Unrest.

My name is Jessica Taylor-Bearman, I am 28 years old and have been suffering with severe M.E. (Myalgic Encephalomyelitis) for half my life. I went from being a very active teenager, who was always out and about, to being stuck in a world of one room, in complete agony. The common misconception about M.E. is that one *just* feels ‘a bit tired’. I could give a whole new meaning to the word ‘tired’. It feels as if a double decker bus full of exhaustion has hit me head on. Every single moment of every single day. I have crippling neurological pain that is incredibly debilitating, and that is just the beginning of my disease. 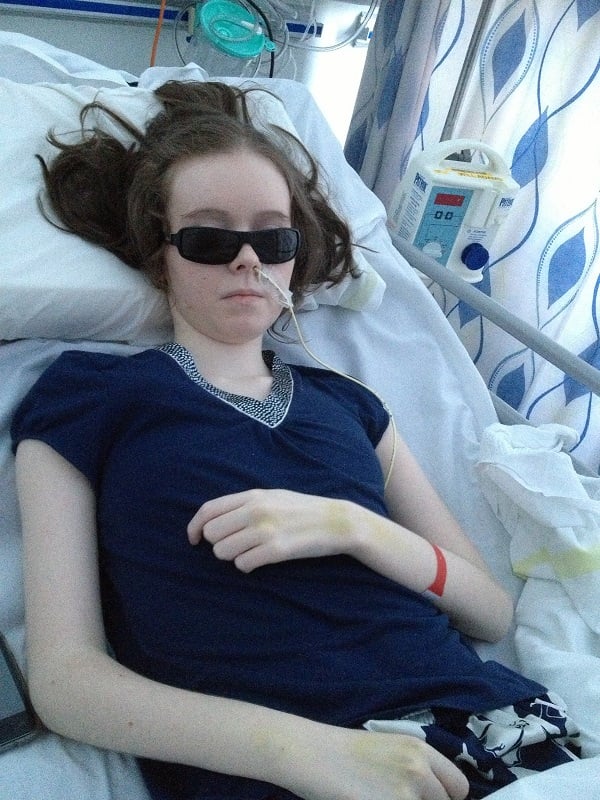 I first became ill with M.E. after I caught a flu virus at the age of 14. I didn’t want to be ill so I carried on regardless, but this was my downfall. I became more and more unwell. Doctors had no idea what to do with me, and it took six months for me to be completely bed bound. To all my peers at school, I had just disappeared. I always describe it as I fell off the whirling twirling world, and was just orbiting in space, too unwell to get back on the ride, I watched instead. Being chronically unwell is soul destroying. For a while, my friends came to visit me in hospital, but the problem was, I couldn’t communicate with them because the neurological symptoms were such, that I could not speak or understand what they were saying. They would just stand over me, crying as they looked at their once active friend, who was now reduced to a girl behind dark glasses, kept alive via nutritional tubes going from my nose to my stomach. I was a shadow of my former self.

Interestingly, the first thing that doctors tried to say was that I must be mentally unwell too. They could not explain my symptoms, therefore I must be clinically depressed. A psychiatrist who had just half a day training on M.E. thought she knew what I needed, and that was to be in a locked ward in the Maudsley. I was very lucky because my parents were incredible advocates for me. They challenged the doctors and did all they could to prevent me from being taken to a mental institution. It is shocking that when someone is so desperately ill, they have to fight to be taken seriously. At the time, I wasn’t depressed. I have no idea how I managed to stay so positive when the rest of my world was falling apart. I started a diary called ‘Bug’, which my parents would write down. Throughout the day, I would slowly code words to them to try and get across how I was feeling. It was only once the doctors had spoken to my school nurse, who had said that I was a popular girl who was very happy, did they start to treat my physical disease more seriously.

I spent over four years in hospital, and many years in and out of hospital too. Now, thirteen years after my first admission, I am rediscovering myself. For a long time, my disease was my identity. People only knew me as ‘the girl with M.E’. Dealing with having a chronic illness has made me completely revaluate my life. Over the past few years, it has influenced my mental wellbeing. I just want to feel well again. I can’t even remember what it feels like to be fully well. I have found out that writing my account of what I have been through very therapeutic. I wrote my book, A Girl Behind Dark Glasses, to give a voice to severe M.E. sufferers, as often we are just missing people. We are missing from society and missing from our former lives. I have missed weddings, funerals, and other special occasions.

May is M.E. awareness month, and I am writing this blog to bring a voice to all the thousands of sufferers of M.E. It is an invisible illness that hits around 250 000 people in the U.K. It is not a rare condition, but the amount of funding given by the government for biomedical research is woefully low. To give a face to this cruel disease, a campaign has been started called #TheRealME. You can join in and #GoBlue4ME by visiting the M.E. Association to see how you can get involved. If there are so many people suffering with this condition, why are we still the millions missing?