Brave, bruised and better for it

Alex is a mum of three and blogs at The Long Chain about life with her family. Her second child, her son Benjamin is profoundly disabled with no formal diagnosis. This blog is about Alex’s experience trying to give her husband, her two daughters and Benjamin a normal holiday, and to prove that it all can work.

With apologies for the spoiler, I can hardly believe it went without a hitch.

Back in the depths of winter, when Benjamin’s health appeared relatively stable, we rashly booked ourselves a summer holiday, more than two hours drive from our local hospital. Twelve hours drive and sixteen hours ferry away from our local hospital. Abroad! During May and June, as he deteriorated, it looked as if we would have to cut our losses and claim on the travel insurance. But, with almost three consecutive weeks of reasonable health under our belt, I nervously started to pack, whilst simultaneously trying to keep everything low-key and last-minute to avoid getting anyone’s hopes up.

Mostly, that is, the hopes of my six-year-old who’s learning French at school and was desperate to show it off: “I can do all the shopping, Mummy, you can just relax.” Because that’s all you do on holiday, right? Shopping and relaxing. My own hopes weren’t really that high to begin with, what with the twelve hours of driving, six of them on the wrong side of the road, the horrendous thought of a sixteen-hour crossing of the North Sea, the likely infestation of mosquitoes since we were camping right by a lake, the high chance of sunstroke, frostbite, drowning, or lightning strike, and the lack of an en suite toilet. 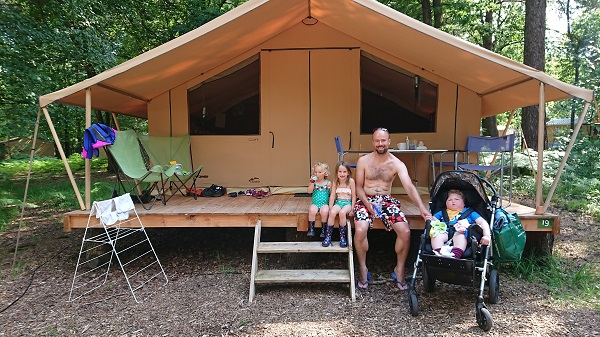 It was so worth it.

For me, there was a lot riding on this. Following three years of in-out hospital admissions, disrupting the lifestyle and opportunities of Benjamin’s sisters, this was my first chance to prove that we can give them a semblance of a normal life. To answer the detractors who said we should abort Benjamin for the sake of the rest of the family. And those who said we’d never make it work with three children. To show that we can all – including Benjamin – have fun times and a decent quality of life. To show that our little family works, plays, and stays together. I was determined to make it work. 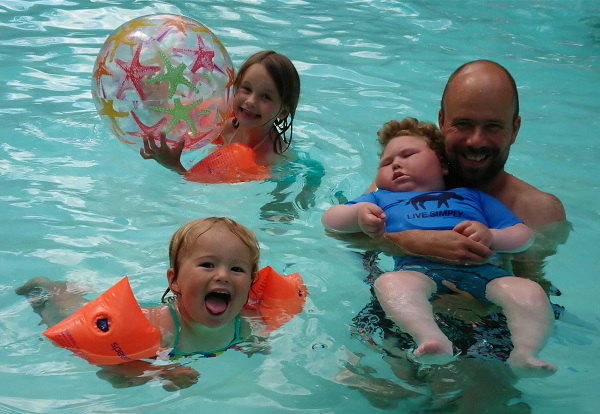 My aspirations were given a massive boost by the wonderful staff of the P&O Hull-Zeebrugge overnight ferry. All we had to do was pop our hazard-lights on, and we were directed to a parking space right by the lift and met by a lovely lady who took charge of Benjamin, leaving us enough hands to manage the girls and the luggage. The same lady seemed to be on hand throughout the entire voyage, always keeping a friendly eye out to make sure we were staying safe and having fun.

Our club-class cabin was amazing! A cold beer from the minibar helped my husband get over his initial panic that we had only three beds (I quickly pulled down the upper bunks that had been stowed against the wall, and the girls just as quickly clambered up and got into their pyjamas, so exciting was the prospect of a bunk at sea). Once we’d coaxed the girls back into their clothes we risked the terrifying prospect that is taking a wayward toddler out on deck, and watched the delights of Hull receding into the evening sun with a G&T before heading down for our all-you-can-eat buffet dinner (which in Jackie’s case consisted of rice, chips, naan bread, poppadum, a bread roll and a scoop of mashed potato – with ketchup, of course – just in case they don’t have carbs in France).

A full days’ drive down the motorway later (with copious stops for coffee, picnics, toilet trips and ice cream) and we arrived at Lac de Sillé, a forest campsite that somehow managed to be both on top of a hill and next to a beautiful lake. With the occasional exception (like our tent being on a wooden platform up some wooden steps, making it somewhat difficult to wheel Benjamin into it), the campsite setup also made life very easy. There were real beds, decent toilets and showers, a fridge, a pastry delivery every morning, a pizza van every evening, draft beer, and plenty of fun atmosphere thanks to the World Cup!

I’d love to say I’d planned it ‘just so,’ but it was pure luck that made it the perfect holiday for everyone. The site was so safe – and car-free – that the girls could have a real taste of freedom, pottering around the woods, building dens, playing tag in and out of the trees. Generally they played really nicely together, and even found novelty in helping with the washing up. They both got to stay up late enjoying the poolside World Cup parties, and as a consequence we mostly got a lie-in in the mornings. 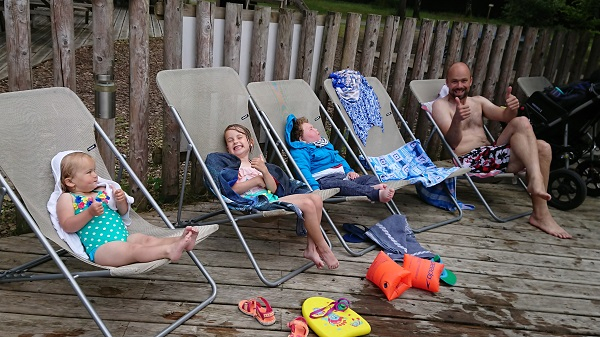 Since we were in the right country at the right time, it would have been churlish to refuse my husband a day out at the Tour de France. And I got to visit local markets, photograph butterflies, and drink cheap wine to my heart’s content. Best of all, the lakeside ‘resort,’ about a mile’s walk away through the forest, had pedalos, ponies, pancakes, a little train and, for Benjy, a beach wheelchair! So many opportunities to spend ‘quality time’ with one another – in and out of the water. But most of the time, Jackie turned out to be right, was spent shopping. Particularly as the local supermarket contained possibly the most exciting invention of the century – an orange-squeezing, juice-making machine!

Of course, there were moments of confusion – and not just involving the mythical motorway exit for the Le Mans by-pass. Caitlin had been so excited about going on a ferry – but once we were on board, the ferry was so big she couldn’t comprehend it and spent the entire journey asking plaintively “But where’s the boat?” There was the morning I got up last and emerged blearily to be informed excitedly, “We’re going to make bunting!” I somehow misheard. “You’re going to make pancakes?” Fortunately we had the ingredients for both bunting and pancakes. Win-win.

And of course it was hard to relax completely. What if Benjamin gets ill? Do we know how to call an ambulance, and how long would one take to come? Can we speak enough French to explain his condition and what he needs? What if some vital piece of equipment goes wrong, or we run out of milk or medications? It wasn’t until we were on the boat home that I really believed we might make it without a medical disaster. 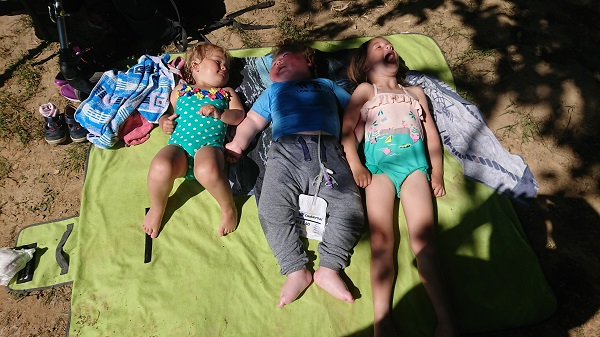 And of course it was hard work. Constantly lifting a 25 kg boy and his 25 kg buggy in and out of the car, the tent, the back-breakingly low camp-bed, and the floor took its toll. Working through his morning and evening routines every day made me realise how much of the weight our wonderful carers take off back home. Remembering all his medications and equipment every time we went out, and working out how to use them away from our familiar set-up and in 30-degree heat, was mentally exhausting. It made me realise this is probably the last time we’ll be able to holiday like this – by next summer Benjamin will just be too heavy to manage without some concessions to accessibility. But, we are so lucky to have had such freedom for so long.

I was pushed way out of my comfort zone in many ways: keeping Benjamin safe in unfamiliar situations; speaking up to make my children’s needs understood – in French; driving a big car on the wrong side of the road; letting routines slip; letting things get dirty; using those hole-in-the-floor toilets! I learned that trying to economise on space by sharing a single tube of toothpaste is self-defeating. I learned that a car packed to the roof with milk and syringes on the way there = a car with plenty of space for nice French wine on the way home! 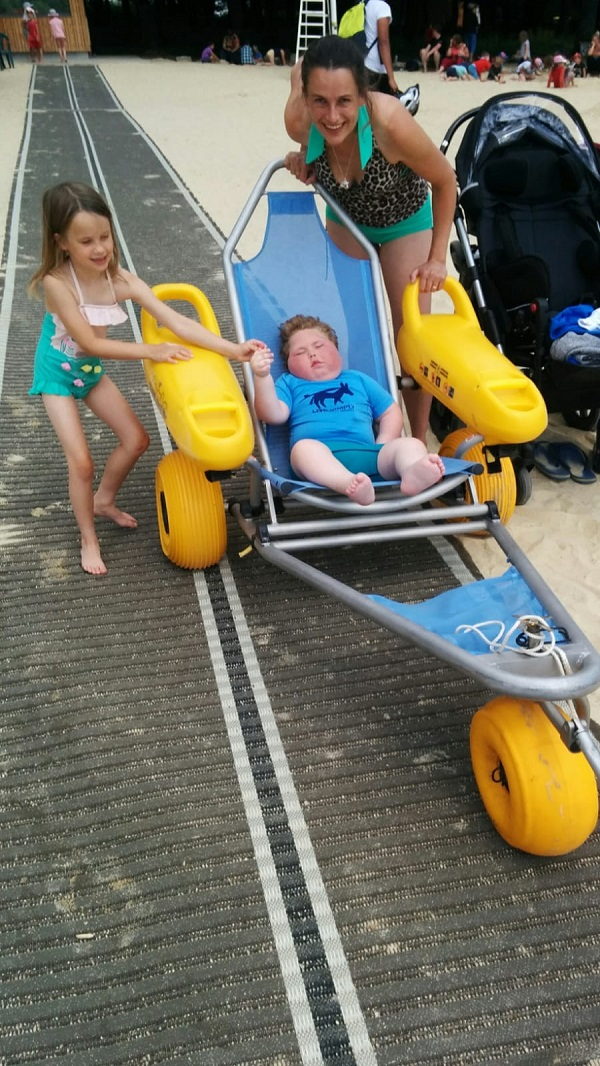 There was no infestation of mosquitoes. Nobody got (too) sunburnt, drowned, or was struck by lightning even in the dramatic thunderstorms we experienced for the first three days. It’s true there was no en suite toilet (at least, not until we got back on the ferry). But, we were blessed with totally awesome weather so we never had to traipse across the campsite in the rain. I know everywhere has had awesome weather this year, but still it felt like Someone was watching over us. When asked “Would you do it again then?” my answer has generally been, “Of course not, we’ve had all our luck now, something is bound to go wrong next time!” But maybe, maybe even if something does go wrong, I think we might just survive…

Have you tried to go on holiday with your disabled child? What are some of the challenges you’ve faced and where would you recommend?