Can baking be made accessible?

This week is National Baking Week, and I thought I would mark the occasion by having a go at baking using all of my assistive kitchen equipment, to see how accessible I can make the process for a visually impaired person.

I made classic scones, because it was one of few recipes I found that was both manageable for a rookie baker and would enable me to use most of my assistive equipment.

1. Heat the oven to 220C/200C fan/gas 7 - The numbers on ovens are so small these days, that it's almost impossible for me to set it to the right temperature without some kind of assistance. In this case, I use bump dots, which are like tactile stickers that help me locate certain points on the oven and other household appliances like the microwave and washer. When I first got the bump dots, my wonderful girlfriend helped me place several of them on the oven in key locations, so that all I have to do is turn the knob to where the tactile dot is. Genius!

2. Now on to the fun stuff! First, start by tipping  the self-raising flour into a large bowl with a quarter of a teaspoon of salt and the baking powder, and mix it all together. I measured everything out using talking weighing scales, which also have a large print screen for those with some useful vision. It can measure liquids and solids, so I need to simply place my bowl on the scales, press the left button to toggle the measurement (which in this case is grams) and then press the right button to return the measurement to 0. After each press of a button, the loud and clear voice announces what is happening and as I weigh out my ingredients, it will announce the quantity about a second or two after I stop adding to the bowl. 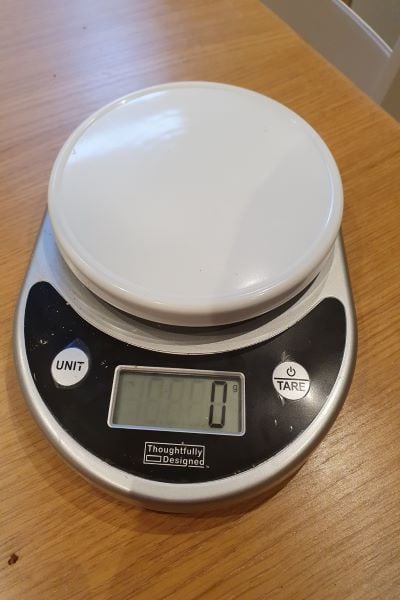 3. Next, add the butter, then rub in with your fingers until the mix looks like fine crumbs, see below an image of the butter weighed out on my talking scales. Following this, stir in the caster sugar. 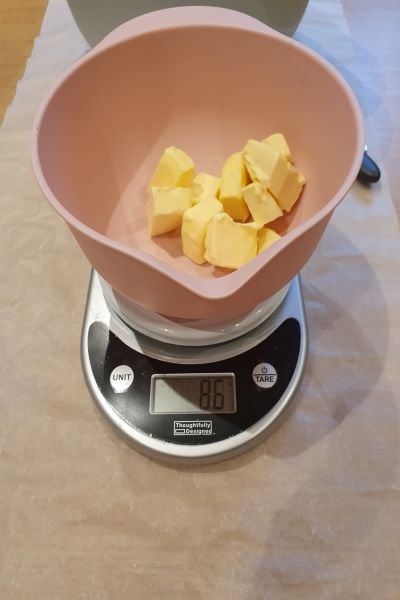 4. Put the milk into a cup and heat in the microwave for about 30 seconds until warm, but not hot.  Then add the vanilla extract to the milk. When weighing out the milk, I again used my talking weighing scales, but first I pressed the left button to change the unit to millilitres. I placed my cup on the scales, reset the weight to 0 and then proceeded to measure out the milk..

In this step, I'm using another small but brilliant assistive kitchen device, a liquid level indicator, which will hook over the rim of whatever kind of liquid holder I'm using and let me know if it's getting close to full or nearly overflowing. It does this through vibratory and audio feedback, which is quite loud and sometimes makes me jump

In this particular situation, all is fine, the quantity of milk isn't enough to trigger the indicator, but it's always good to have it there, in case I accidently weigh out too much. 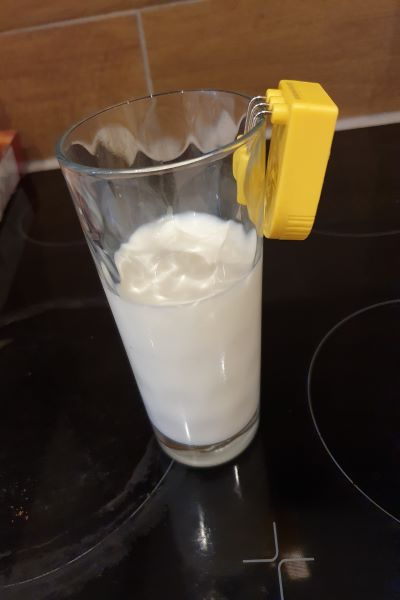 5. Before proceeding with the mix, put a baking tray in the oven to make sure it’s nice and hot for when the scones are ready to go on it.

Now, back to the mixing bowl…

6. Make a well in the mixture and add the entirety of the liquid in one go, then start to combine everything together with a cutlery knife. Everything will seem pretty wet at first, but it will slowly come together into a ball of dough. I used a bit more flour during the process but that is optional.

7. Now that the dough is ready to go, scatter some flour onto the work surface and tip the dough out. Then dredge the dough and your hands with a little more flour and fold the dough over a few times until it’s a little smoother. Pat into a round shape about 3 or 4cm deep. Take a 5cm cutter and dip it into some flour. Plunge into the dough, then repeat until you have however many scones you’ve been able to cut. Then make another round shape with what is left of the dough and cut again. Repeat until you've used up all the dough.

8. Before they go in the oven, brush the tops of the scones with a beaten egg and set carefully on the hot baking tray. I'm quite susceptible to accidentally burning myself when using the oven, so I always use thick oven gloves when putting things in and taking things out.

9. Bake for 10 minutes until risen and golden on the top. 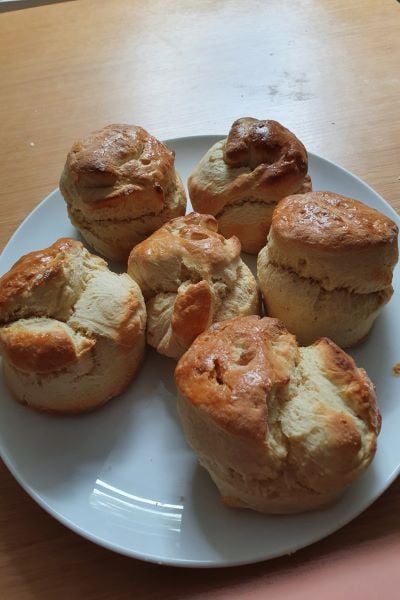 And here's the end result, not bad for a relatively rookie baker, and they taste yummy too! I like my scones on the bigger side.

How do you make baking accessible?

Making these scones would have been much more difficult for me, if not impossible, without all the assistive kitchen equipment I use. I'd love to hear about how you make baking easier for you, or how you'd like to make it easier in the future. Is baking accessible?

Talk to our chatbot and give us feedback on the community.
Tagged:
4 · Share on FacebookShare on Twitter