The truth about Marfan syndrome

“People tend to have a very narrow view of how this condition presents itself” – The truth about Marfan syndrome.

This February has been a special month for numerous reasons – Valentine’s Day, Pancake Day, and the arrival of brighter nights.  But you might not know that February is important for another reason too, as the whole month is dedicated to raising awareness of a relatively unknown condition, Marfan syndrome.

What is Marfan syndrome?

Marfan syndrome is a disorder of the connective tissues which maintain and support the body’s internal organs.  The syndrome is generally inherited from either parent and varies in severity from person to person.

This NHS webpage about Marfan syndrome describes common characteristics as:

How are people with Marfan syndrome diagnosed and treated?

A qualified physician will normally take a full family history and carry out a physical examination.  While the Marfan Organisation lists other tests used to gain a diagnosis as:

As Marfan syndrome is a chronic condition that presently does not have a cure, treatment aims to manage symptoms and reduce the chance of complications.  This NHS webpage about Marfan syndrome treatment details services a person can be referred to for treatment including a geneticist, cardiologist, ophthalmologist and orthopaedic surgeon.

To find out more about the lived experience of Marfan syndrome, we spoke to Shona-Louise, blogger at ShonaLouise.com. 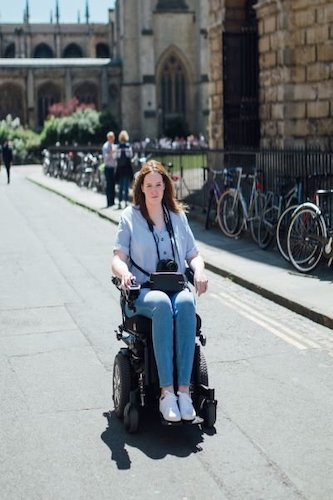 Your blog describes how you were diagnosed with Marfan syndrome as a young baby/toddler.  In what ways do you think having the condition impacted you as you were growing up?

Growing up, the biggest way in which Marfan affected my life were the yearly trips to Great Ormond Street Children’s hospital to have heart check up’s. I experienced joint pain and hypermobility as a child, but it wasn’t until I hit my teenage years that Marfan became a bigger part of my life. I was diagnosed with Scoliosis, with 2 spinal surgeries following to correct it, and also a hip condition that led to a hip replacement at 18 years old. Whilst Marfan didn’t affect me much as child, I did however soak up as much information about it as possible. My mum has the condition too and was always really open with me as a child about Marfan and what it meant, encouraging me to speak at my doctors’ appointments. It was her actions that meant that when Marfan did begin to cause me problems, I was the most prepared I could be.

How do you cope during challenging periods such as when you had the operation to treat your scoliosis?  What difference do your care team/loved ones make during these times?

For me, writing about my experiences has been incredibly cathartic. It’s easy to feel alone when you have a condition like Marfan but writing on my blog about my surgeries and diagnosis led me to find others living with the condition, and that online connection helped me a lot during the harder times. When it comes to my doctors it makes such a difference when my team is knowledgeable about my condition, and when they also trust my knowledge too. Support can come in many forms and for me having my medical teams work alongside me, trusting that I know my body, has helped massively.

What attitudes have you come across from the general public in connection to Marfan syndrome and being a wheelchair user?  And are there any common misconceptions that frustrate you?

Whilst it’s often frustrating that so few people have heard of Marfan syndrome, for me it’s a greater frustration when people misunderstand the condition. People, including medical professionals, often see it as only a heart condition that makes you tall, which has led to my chronic pain and physical disabilities being misunderstood over the years. People tend to have a very narrow view of how this condition presents itself, but it’s a spectrum and it looks differently in everyone. When I first started using a wheelchair a lot of people struggled to understand why it was needed, especially when I’d seemingly had no physical problems previously. I’d been an active child running around, so it took time for some to get their head around the fact that I needed to use a wheelchair now. It was those attitudes that were such a barrier to me accessing the right support though.

How has having Marfan syndrome positively added to your life?

If I didn’t have Marfan syndrome then I wouldn’t have my career, I wouldn’t be a published author, I wouldn’t have most of my success and relationships. All of my achievements can be linked back to my disability and Marfan and I’m really proud of that. I am so much happier for following the path my life has gone down, for using my differences to my advantage. I’ve met friends for life through the Marfan community and it’s a honour whenever I get to represent us.

What one key message would you like our community to know about Marfan syndrome?  And how can they be an ally to people affected?

Marfan is a syndrome affecting the whole body, it’s not just a heart condition and it doesn’t just make us tall. It affects every single person differently as well, even my mum has a very different experience to me. So, when you’ve met one person with Marfan, you’ve simply just met one person with it, not all of us. It’s super important to raise awareness of Marfan, if a person is diagnosed than life threatening cardiac events can be avoided, it’s when people go undiagnosed that the risk increases. So, use this month as an opportunity to share some information on the signs and symptoms, it could make a massive difference to someone’s life.