Balls, bells and blindfolds - Innovation in disability sports — Scope | Disability forum
Find out how to let us know if you're concerned about another member's safety.
Read our community guidelines and our community house rules.

While many of the sports at the Rio 2016 Paralympics are either direct copies or adaptations of sports featured at the Olympic Games, there are two which are unique to the Paralympics.

Boccia has been a Paralympic event since 1984 and is both a team and individual wheelchair sport in which players attempt to throw coloured balls as close as possible to the white ball. Each competitor has six balls per round, and there are 4- 6 rounds per game, depending on whether it’s an individual or team match. 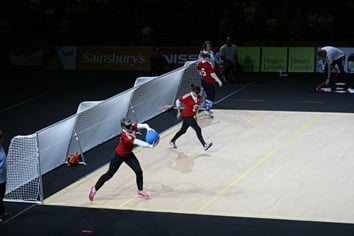 The other sport unique to the Paralympics is Goalball. Goalball was created after World War 2 as an activity to aid the rehabilitation of injured veterans, and has been a Paralympic sport since 1976.

A team sport played by visually impaired athletes, each match pits two teams of three against each other to attempt to score the most goals. A ball with bells inside it is used, and to ensure equality, all players are blindfolded throughout the two 12-minute halves.

Do you know of any other disability sports which are unique? Do you compete in any? Let us know by commenting on this post. Extra points for coming up with a new idea for a sport.