Para Ice Hockey — Scope | Disability forum
If we become concerned about you or anyone else while using one of our services, we will act in line with our safeguarding policy and procedures. This may involve sharing this information with relevant authorities to ensure we comply with our policies and legal obligations.

My name is John Oakley and, though I am a non-disabled person, I play Para Ice Hockey for the Sheffield Steelkings. The team plays in a small league and consists of adults who are disabled as well as non-disabled, and both male and female.  There is no upper age limit, but it is necessary to have a good degree of upper-body strength.

At 62 years of age, I am the most elderly player in the league. Whilst I will never be the best player, I do not consider myself to be the worst either and have no intention to retire in the foreseeable future. I shall continue until either I am unable to physically take part, or new players surpass my level of ability. To this end we are continually seeking to increase the number of team members and would love to hear from people, particularly those with lower-body impairments but good upper-body strength, who would like to compete in this fast and full-contact sport.

The Sheffield Steelkings Para Ice Hockey Club was founded in March 2014 and I joined them in the summer of that year. One of my sons, Jake, and his girlfriend, Rach, had already become part of the team and I thought how exciting it sounded. However, I initially avoided showing my interest as I didn’t want to encroach on their activity. In spite of this, it wasn’t long before Jake suggested I might enjoy going down to Ice Sheffield and giving it a try. Well, I didn’t require being asked twice and I excitedly joined in the next available training session.

The sport itself is a direct descendant of ice hockey and was invented at a rehabilitation centre in Stockholm, Sweden, in the early 1960’s by a group of Swedes who, despite their physical impairments, wanted to continue playing the game they loved. The men modified a metal-framed sledge and fitted two regular hockey skate blades. Using round poles with bike handles for sticks, the men played without goaltenders on frozen lakes in and around the Swedish capital. The sport gradually caught on in various countries with Great Britain establishing a team in 1981. It became an official event at the 1994 Lillehammer Paralympic Games in Norway.

I am pleased to say that the last season was our most successful to date but we want to develop further and become league champions. This is my main ambition for the Steelkings, even if I have to relinquish my place on the team for us to achieve this. We train at Ice Sheffield most Fridays between 6pm and 7pm, on a full-sized ice pad, and we are coached by my son, Jake. Don’t be under any illusions that he takes it easy on his old dad though because Jake too has high ambitions for our club and training is hard. As a general rule it consists of a warm-up followed by some skills training and rounded off with a scrimmage, which takes the form of a simulated game. 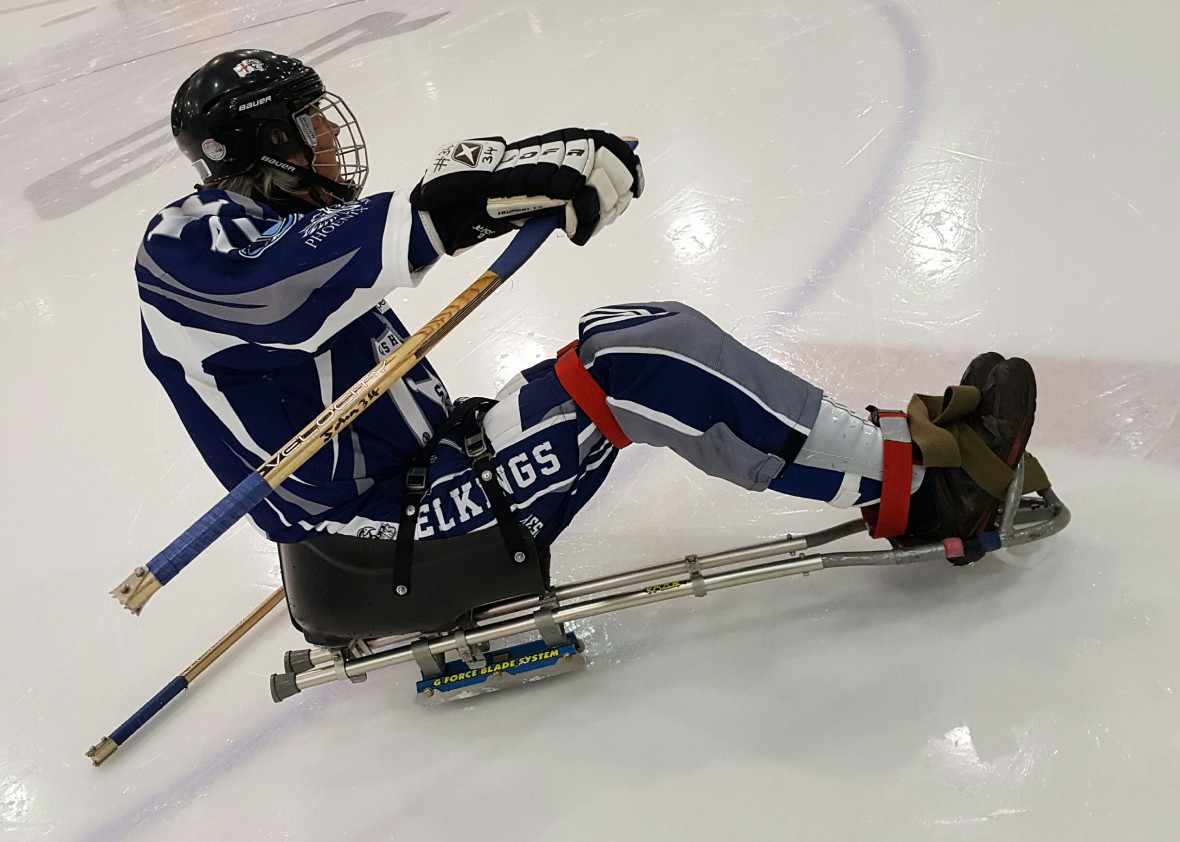 The equipment for para ice hockey consists of a tubular-framed sledge with a plastic wrap-around seat and a pair of blades underneath.  Propulsion is achieved by the use of two small ice hockey sticks which are held in either hand. These sticks have pointed metal ‘picks’ attached to the ends and they are used to grab into the ice, thus allowing the player to push the sledge forward. Turning is achieved by a combination of using just one stick and leaning, as a cyclist might do.

Are you able to combine upper-body strength with good balance whilst being seated in a sledge? Are you prepared to train hard? Well, if you think the answer is “yes” to these questions then I would love to hear from you.  Come and challenge this 62-year-old fella for his place on the team!