Did you know that..........? — Scope | Disability forum
Find out how to let us know if you're concerned about another member's safety.
Read our community guidelines and our community house rules. 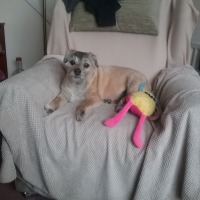 Did you know that
Every domesticated dogs ancestor were wolves......?

Did you know that
That the name Brontosaurus had to be withdrawn due to the fact two indipendant dinosaur finds of the same spiecies were named differently.........sorry to say Brontosaurus lost out due to the other fossil being named first..........?