A history of braille, and how relevant is it in 2021? — Scope | Disability forum
If we become concerned about you or anyone else while using one of our services, we will act in line with our safeguarding policy and procedures. This may involve sharing this information with relevant authorities to ensure we comply with our policies and legal obligations.

World Braille Day is an opportunity to raise awareness of the issues impacting those who are blind or visually impaired within society. The invention of braille has transformed accessibility for those with visual impairments and promotes equal opportunities. It is hoped that by highlighting the methods which we can implement to support those who have sight loss, the world will make greater attempts to promote inclusion and accessibility.

Why is it celebrated on January 4th?

It is celebrated on the 4th of January because it is the birthday of Louis Braille. Louis was born in France in 1809 and became blind due to a childhood accident. However, he was determined to overcome barriers and inspired by Charles Barbier's night reading system, at the age of just 15 Louis invented the tactile writing and reading method we know as braille.
It wasn't until 1854 that the Braille system became more widely used. It was initially introduced within the school where Louis had studied, and was quickly adopted by other French schools. Eventually, the system became used worldwide. Different countries have gone on to modify braille, in 2015 the UK introduced a modified version of Unified English Braille (UEB) to help bring about consistency and ease to those using English-language material throughout the world. 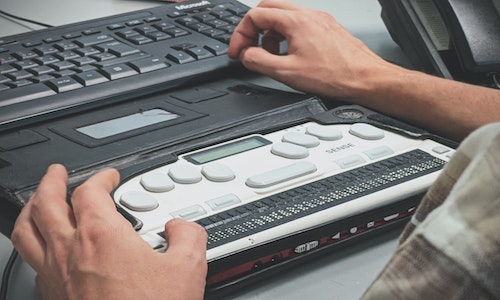 Last year on the community, we wrote about the then imminent arrival of a brand new set of LEGO braille bricks, designed to teach young people about braille in the classroom.
As part of World Braille Day, LEGO is continuing the roll-out of the bricks in several countries worldwide, which I'm sure will be a welcomed new year's gift for children across the UK and other nations. If you are interested in finding out more about the bricks, you can read the piece linked above and listen to this podcast from the RNIB.

Does braille still have relevance in 2021?

We'd be interested to hear your thoughts on this question. As technology advances many people would argue that the necessity to learn braille is on the decline, given the massive amount of options out there for blind and partially sighted people.
Historically braille has been the only option for sight impaired people to effectively read, however with the advancement of modern technology that no longer is the case, so it's an interesting debate to have about whether braille is as relevant as it once was, we'd be interested to hear your thoughts below, and you can also read a piece we wrote on this subject toward the back end of last year.
Online Community Coordinator