Reflections on disability representation in Channel 4's 'It's a Sin' — Scope | Disability forum
New to the community? Remember to read our community guidelines and our community house rules.
Concerned about another member's safety or wellbeing? Find out how to let us know.

Reflections on disability representation in Channel 4's 'It's a Sin'

Today’s guest blog comes from the talented Melissa Parker, a writer and wheelchair user, living with Cerebral palsy.  Discussing Channel 4’s recent hit TV show ‘It’s a Sin’, Melissa reflects on what the programme tells us about disability representation on our TV screens and in society at large. 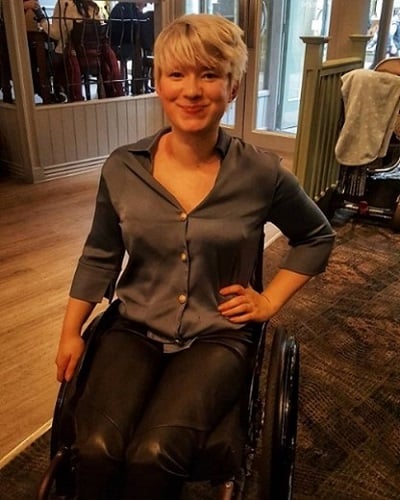 “It’s a Sin” is a program about the AIDS crisis of the 1980’s and 1990’s. I noted that a character was in a wheelchair, later I found out that a disabled actress portrayed her. I had presumed that she was a non-disabled person ‘playing’ disabled. I wanted to reflect on this quiet presumption.

When was the last time you saw a non-disabled actor who was ‘cripping it up’? After I watched the show, I read several articles and interviews with Russell T Davies, writer of It’s a Sin. One quote stayed with me, “You wouldn’t cast someone able-bodied and put them in a wheelchair.” I wouldn’t, but many have and continue to do so. The desire for authenticity is commendable, but it needs to go deeper.

It goes to the heart of what it is to be disabled, the lived experience, as people with disabilities we carry around the effects of cultural stereotypes and harmful myths. A few months ago, I was told to, “get up and walk” by a drunk man in the street. A woman told me it was a shame that I couldn’t walk because “I had a pretty face”.

I believe that these interactions are, at least in part, a result of how people with disabilities are represented in the media. As Gamson et al. suggested, we are overwhelmed with media-generated images of the world and use them to construct meaning about political and social issues. The lens through which we receive these images is not neutral but manifests and validates the opinions of those who are in charge. Thus, I would suggest that when it is trained on disabled people, the lens is distorted; it is a view through which we are frequently seen as pitiful, pathetic and unable to function as society members. As David Hevey noted, “The history of the portrayal of disabled people is the history of oppressive and negative representation.” This means that “disabled people have been presented as socially flawed able-bodied people, not as disabled people with their own identities.”

The use of an actress with a disability in this role is progress. It is a supporting role that does not mention the character’s disability but instead makes it incidental to her role as a mother and, later, as an HIV/AIDS campaigner. As Davies himself remarks, “The part wasn’t written as disabled, Andria [Doherty] simply made it her own.”. How often do we, as people with disabilities, manage to achieve this? To see ourselves reflected as parents. As people struggling not with our disability, but the realities of living in the 80’s and 90’s during a silent pandemic? With few exceptions, TV shows commissioned with disabled characters often portray disabled people as objects of pity, their disability is still the main focus, not their identities. As though society, spoon-fed by the media, has decided that our lives must begin with diagnosis and end with a struggle, and please, I beseech you, try to make it inspirational. The unfortunate thing is, I believe it is working that the media is so accustomed to using us in this manner – as a plot device, as a place holder, as a cardboard cut-out of misery. That we, in turn, have come to accept it, not as fact, but as the status quo. I presumed that they would not make an effort to cast a disabled person in such a role. I believe this to be a learned and conditioned response for every character like Eileen, there are, historically, many more TV and film counterparts who are consumed by their disability. Therefore, they are devoid of personality, like a faulty run-away Dalek screeching, “pity me” as it goes. For every writer like Russell T. Davies, there are more who would put a non-disabled person in a wheelchair, and why not, they may ask, wasn’t it ever thus?

It seems that until we have got disabled people in positions of power throughout the whole creative process in programme-making, we will not see real change. This is according to the Creative Diversity Network’s (CDN’s) latest Diamond report, which reveals there is still a significant lack of disabled people working in both on and off-screen roles. The report, which is the most extensive consideration of diversity in the United Kingdom’s television and is supported by UK broadcasters such as the BBC and Channel 4, found that disabled people make up just 5.8% per cent of contributions off-screen and 8.2% per cent on-screen. This low percentage is at odds with the figure for working-age disabled people in the UK which is 17 per cent and despite the fact that we comprise 18 per cent of the population. We are also the world’s largest minority.

Figures from Scope suggest that there are 14.1 million disabled people in the UK. We have so many different roles in society, just like anyone else – we’re parents, we’re friends, we’re spouses – we’re Eileens, but we don’t see that reflected. Davies states that, “I’m now at the stage in my career where I’d never cast an able-bodied person in a disabled role.” A fantastic achievement which feels like a hopeful note for the future as we need people in positions of power to help us refocus the lens. For too long, we have lived in the heads of people who write for us but do not understand us. Thus, we have lost control of our lives and became who they want us to be. Our fictional counterparts may be hollow and passive, but we need to rally, we need to expect more. We need authenticity, both on and off-screen, as Davies notes, “the fight goes on!”.

I'm sure we all agree that was a hugely powerful guest blog from Melissa (thank you!), and one that raises many questions.  Although I'd encourage you to ask your own, I'm wondering:
Let me know your thoughts in the comments below.
Online Community Co-ordinator

Concerned about another member's safety or wellbeing? Flag your concerns with us.
4 · Share on TwitterShare on Facebook