Fundraising And Being A Young Carer — Scope | Disability forum

Fundraising And Being A Young Carer

I’m Ellie, and I am a photographer and dog lover. I have just completed a trek across the Great Wall of China to raise money for the MS Society in memory of my mum. I have been totally inspired on this trip to do more for MS so you may now call me an MS fighter. I am part of the army that will defeat it.

I’m not sure when I realised that I had been a young carer, I’m not sure I actually ever took on the official title of ‘young carer’. It possibly wasn’t until I was in my early 20’s when I was seeing a psychiatrist that the term ‘young carer’ actually meant something to me. 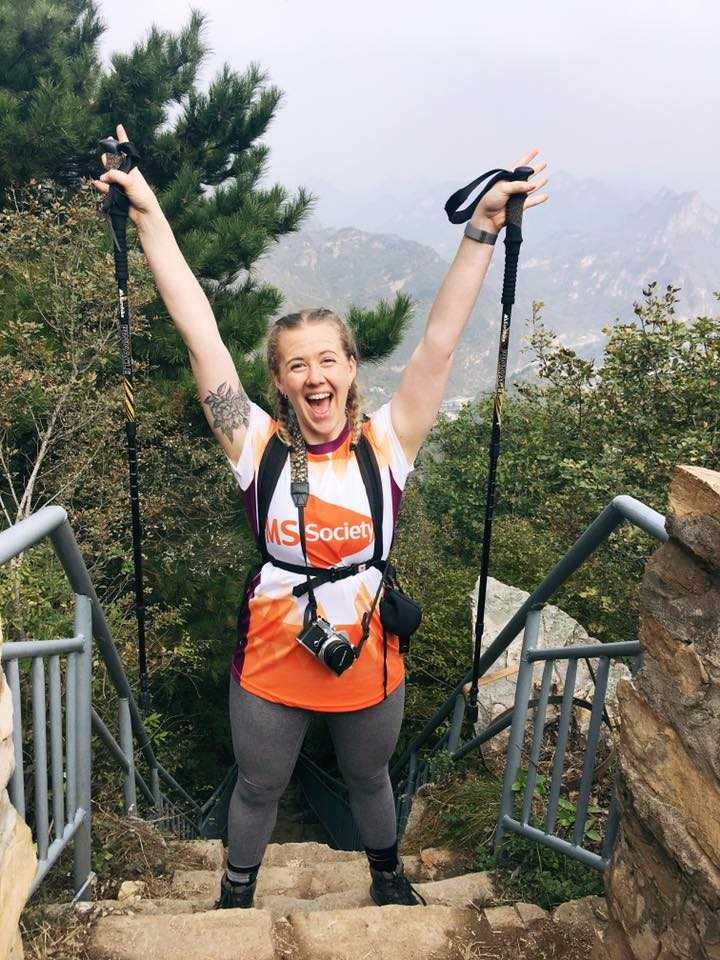 Mum had Multiple Sclerosis and had been diagnosed since she was in her early 30’s which meant that to me, my mum had MS, had always had MS, and MS was just a part of our lives. It was the most normal thing to me that my mum couldn’t walk and needed help with most things. Simple tasks like popping to the shops weren’t so simple to us, we had to lift mum into the car, pack up the wheelchair, drive to the shops, get the wheelchair out of the car, get mum out the car and into the chair, wheel her around the shops and repeat to get home. That’s not exactly everyone’s regular shopping routine but it was our regular routine and it was just that, normal.

To begin with, it was just very little things we helped with, getting things down from up high (this was great as a kid as I got to clamber all over the furniture with full permission), fetching things from other rooms, helping her stand or move from chair to chair. As time went on we just did more stuff for her, it was a natural progression to be fetching more things, lifting more things, it became a lot harder to move her, her legs moved less and less and we had to get stronger but this was just all part of growing up and all part of our lives. Nothing was sprung on us, it just happened and it was fine! We were still happy, we were still a family.

When things started becoming a bit too hard, carers were brought into our house: there was a lot less of the heavy lifting to do but much more of the fetching things. As I got older, the hormones quite clearly kicked in and there was a lot of teenage angst that meant whenever mum asked for anything she was met with the wrath of a teen girl who really wasn’t having the easiest time at school or home. It’s not that I didn’t want to help, I was just bored of helping.  No one did anything wrong, I had just hit an age where I was aware of constantly having to fetch and lift when all I wanted to do was listen to angry music and talk to boys on MSN (RIP MSN).  I fought mentally with this for a while feeling extremely guilty for not always being there but even if mum had been well, I would have still been a feisty teenager and we still would have fallen out, so there’s no way I can hold onto any of that anger or guilt.

When I realised that I had been a young carer, it was as if a tonne of bricks was suddenly lifted off my chest. Life was really hard! What me and my brother did was not normal, we weren’t just children, we were young carers. We did so much more than live a life, we lived our own lives and helped our mum live hers. We might not have done it with a smile on our face every time, we may have muttered words we didn’t mean, but we were born with a role that not every child is born with and we just got on with it.

One thing I do regret is that I didn’t associate myself as a young carer and I didn’t think I needed any help. This is possibly to do with how stubborn I am, however I can’t recommend enough that young carers take a step back and really look at what their role is and go and talk to someone about it. There is a lot of support for people out there and as much as I didn’t think I needed the support at the time, I really really did.

What do you think of Ellie’s story? Let us know in the comments below!